On Saturday, thousands of people flocked to Liverpool’s Baltic Triangle for this year’s Sound City inter-city music festival in the glorious sunshine. Featuring some of the UK’s most exciting up and coming bands, this weekend was always going to be one to remember. In its eleventh year, the festival is going from strength to strength; this year showcasing music on multiple stages in repurposed warehouses, bars and cafes with the multi-venue location allowing for a variety of genres.

We started off at the Pirate Studio stage and as per the fantastic team were on the ball making sure all bands’ needs were met providing them with brilliant sound. First up was singer/songwriter James Holt. Championed by Brian Eno and played on numerous radio stations, it was very clear to see why as he has one hell of a voice. A brilliant start to the day: he got the whole crowd’s feet tapping and brought many a smile with his sharp wit and humour – not only in his poetic songwriting but also in-between songs. With every song the crowd became more and more entwined in Holt’s performance which had a real rock ‘n’ roll/folk vibe, clearly inspired by the likes of Bob Dylan and The Beatles. James captivated the whole audience, a brilliant start to the day.

Next up on the Pirate Studio stage were False Advertising from Manchester, a name that’s come up a lot recently and quite rightly so. Compared to a band from the nineties grunge scene (of which I was a huge fan), they are successfully putting their own mark on the genre. A real draw for me was when front-woman Jen Hingley and Chris Warr started swapping vocals, guitar and drumming track by track. Oozing attitude and killer guitar riffs, the band upped the energy transforming the atmosphere of the room from the offset, smashing through the set at a furious pace. It was loud, brash and experimental – I loved every minute – Jen has all the ingredients to be a very successful and iconic front-woman.

We left Pirate Studios to call and see the lovely Ivan at Eastwood Guitars. We arrived to find the brand were showcasing their stunningly beautiful guitars for their first UK pop up shop at Unit 51 café, some of which No Hot Ashes and Calva Louise were trying out before their sets on the Modern Sky Stage. 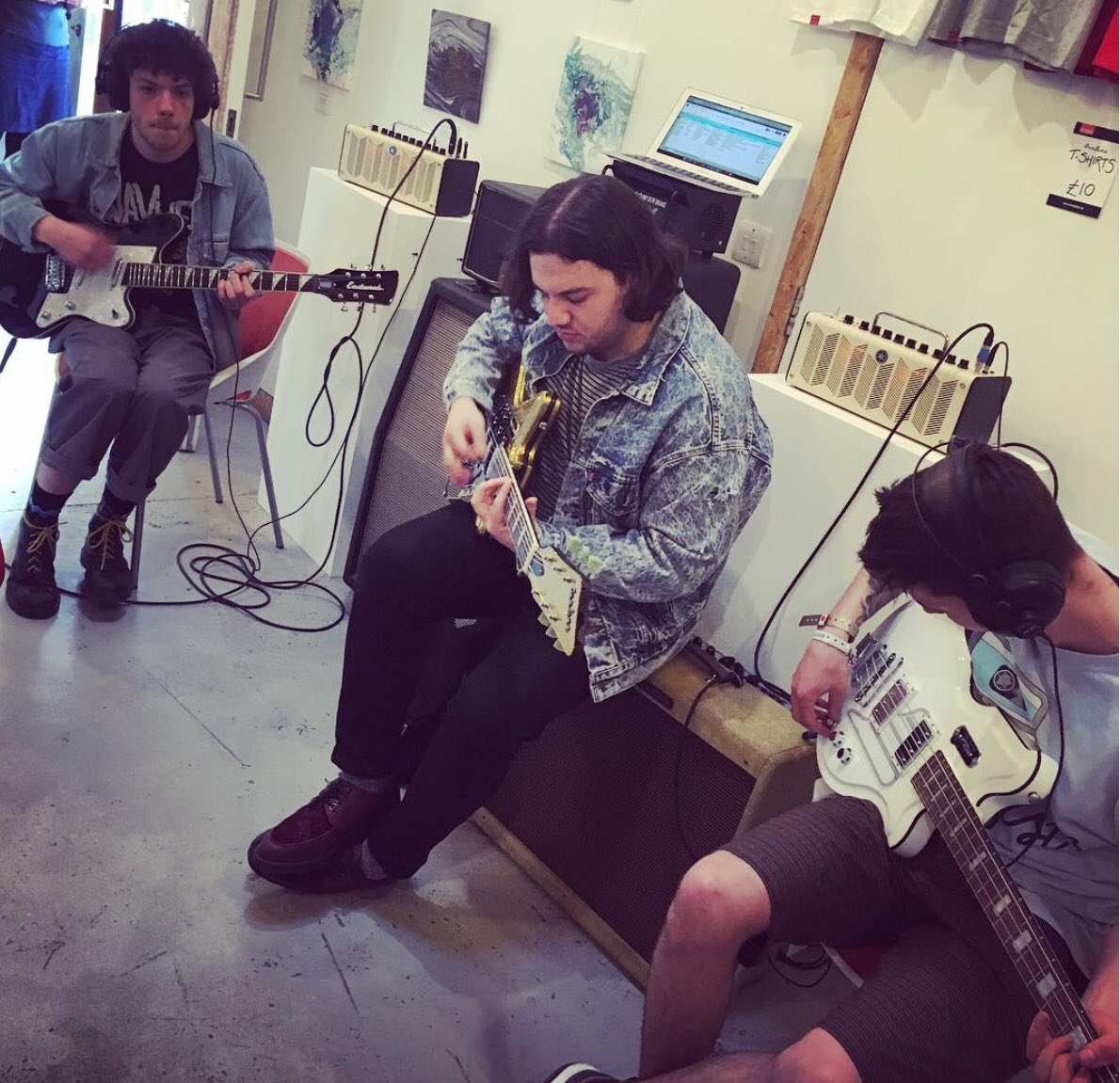 We spent an hour drinking in the sights and sounds of Cafe 51 as we were serenaded by indie pop sensation Casey Lowery, who is a real cheery soul with a beautiful voice. He’s not only been Radio One’s ‘Artist of the Week’ but also sold out some of the UK’s largest and most well known venues even before releasing his first single. His infectious personality shone through along with his beaming smile and you couldn’t help but be drawn to him. A magnetic yet chilled performance, Casey’s enthusiasm is contagious. Leaving us with huge smiles.

We headed over to see yet another Radio 1 favourite – RedFaces at Hanger 34. Stepping into darkness and blue neon lights, the band played to a modest crowd. In simple terms this band is good, like really good. On the run up to Sound City, their infectious tracks ‘Messed Up Feeling’, ‘Wise Up’ and ‘Take It Or Leave It’ have been played religiously in our house and I prayed their live set would sound just a brilliant. It did. When a girl at the side of me shouted to her friend,  ‘His voice is just like listening to them on Spotify,’ I was inclined to agree. The lead singer is an outstanding vocalist and you could easily hear all his lyrics clearly throughout the venue.

Soles burning, we headed back over to the Baltic Market for The Wholls, a massive highlight of the day. On top form, the energy the band generates always transmits to the audience creating a brilliant atmosphere. These guys are some of the most hardworking in the business, recently racking up 38 gigs in seven weeks – they own any stage they are put upon and Saturday was no different. With their killer hooks and soaring bass, the band tore through hits ‘X21’, ‘Roll Out’ and latest single ‘Going Down’. Nothing beats that indescribable flush of euphoria when you see a band live and you walk away feeling as if you’ve witnessed a spectacle of the highest calibre and with Tordy and Santino Cocchiarella’s impressive guitars and vocals, Daniel De Feo pounding drums and Joe Stevenson driving guitar, we certainly did that. There was a real sense of disappointment as they left the stage, they certainly left the Sound City crowd wanting more.

Following The Wholls was the stellar Bang Bang Romeo. Recently back from New York and LA after signing to Eleven Seven, the band hit the studio whilst over there and got to work recording their debut album in LA’s bohemian Venice Beach. It is immediately clear to see why they have secured a worldwide deal as Anastasia takes to the stage. A visually and aurally stunning performance of all that is big, brash and beautiful in the world of soulful rock began as Anastasia’s heart-melting vocals filled the room. The band belted out ‘Runaway’, ‘You and I’, ‘Natural Born Astronaut’, ‘Chemical’, ‘Invitation’ and ‘Adore Me’ all of which you should check out. Anastasia’s voice held the attention of every person in the room.  A truly breathtaking, spine-tingling set. The sky’s the limit for this band.

We dashed over to Baltic Social which out of all the venues sadly was the least atmospheric – everyone was sat eating and drinking and it looked more like a chill out venue and not one that would next be playing a band described as feral, explosive and euphoric! Engaging the crowd from the get-go, Avalanche Party tore down any boundaries and created a racket to be proud of, despite some sound and mic issues. Front-man Jordan weaved around the venue climbing on the bar, the tables and shook on the floor as he belted out Porcelain, I’m So Wet and Revolution amongst many others. If there is one thing that this band have in abundance it is stage presence and charisma. This inevitably covered up any cracks. The set was effortless as the band have honed their high-octane live set down to a T. To put it simply, Avalanche Party have to be seen and heard to be believed. Bigger stage next year please Sound City!

With hardly any time to catch our breath we were back over to Cafe 51 to snap and watch Bang Bang Romeo’s live session for Eastwood Guitars and Sound City. We knew this would be special from the offset, in a gorgeous small wooden room (which resembled an over-sized sauna!) we were treated to a personal live show. The band played ‘Chemical’ and ‘Johannesburg’ and it was a truly emotional experience which fell on very appreciative ears. Many bands took part and over the weekend there was music and interviews from The Wholls, Calva Louise, Queen Zee, Hey Charlie and loads more. You can catch up here…  https://www.facebook.com/liverpoolsoundcity/

It’s been a while since I watched Doncaster three piece The Blinders. After successfully picking up attention and a solid pace last year on the This Feeling stages, the band have signed to label Modern Sky. A must see on our trainee Stevie’s list, we headed over to the Modern Sky Stage. Every word front-man Tom sung was sung back by the crowd at an ever-increasing volume – it was inevitable that this would happen with lyrics like ‘There Is No Hope’ and ‘Its A Brave New World’. The band’s tracks ‘Ramona Flowers’, ‘Swine’, ‘Brave New World’ and new single ‘L’etat C’est Moi’ created absolute mayhem in the crowd which resulted in some of the loudest audience singing of the day.

A funny highlight of the set was when a member of the crowd managed to get on stage, Tom passed him the mic as he screamed ‘Fuck the Tories’ as the crowd chanted back at him.

After The Blinders, we headed back to Pirate Studios where Liverpudlian band Cabezudos took to the stage with their eclectic and hypnotic dose of blues-rock. The band have exceedingly powerful on-stage dynamics which had the whole crowd transfixed from the word go. This Liverpudlian quintet have a real flair for diverse and immersive song-craft, complete with raw emotion and spirited, highly charged musical swagger. The band soared confidently through a set comprising of both old and new music, including tracks ‘Tempting Fate’, ‘Killing Time’, ‘Can I Take You Away?’ and finishing on ‘Give Me your Love’.

As expected, fans were queuing down the street by the time we arrived at Camp & Furnace for the DMA’s headline set. The band played a number of singles from their new album with lead single ‘For Now’ going down a storm. One thing that always shocks me with the DMA’s is that they don’t look like they sound – in their retro nineties trackies and baseball hats the band are so polished it’s unreal. Tommy O’Dell’s powerful yet soft vocals wowed the crowd: all the tracks old and new are loaded with melodies and capture you immediately. The energy on stage quickly launched plenty of ‘hands in the air’ moments in the packed out venue. The band are frequently compared to Oasis – I may be one on my own here but I am inclined to disagree. This was my third time seeing the band and at no point did it feel or sound like watching Oasis or any nineties band to be honest. What did stand out was the genuine delivery, tight musicianship, upbeat rhythms and soaring vocals throughout. DMA’s are so much more than a nineties revival band and deserve credit for their brilliant songwriting and hard work winning over their legion of European fans. A superb end to a fantastic day.

A superbly organised festival with top notch food and venues, Sound City impressed in all areas. We had a brilliant time and the whole festival was just full of smiles from start to finish. We sadly missed some of our favourites like Calva Louise, No Hot Ashes and Idles due to gig clashes and some venues running late but as always be other times.

There was a joyous atmosphere on Saturday and a united vibe that effused from every venue and gig-goer. Walking around the Baltic Triangle past teenagers dancing around and middle-aged couples smiling at you broadly in the afternoon sun made for an unforgettable day. It succeeded in cementing itself as easily the most fun inner-city multi-venue event that we’ve been to so far and we will definitely be back next year.